With its rich history of research and innovation, Cambridge has always celebrated its love for science – and this is nowhere more apparent than at the Cambridge Science Festival, which has been running every year since 1994. This year, the festival ran from 10 to 25 March and included thought provoking talks, workshops and exhibitions on some of the latest advances in science.

Here’s a short rundown on what happened at the festival: 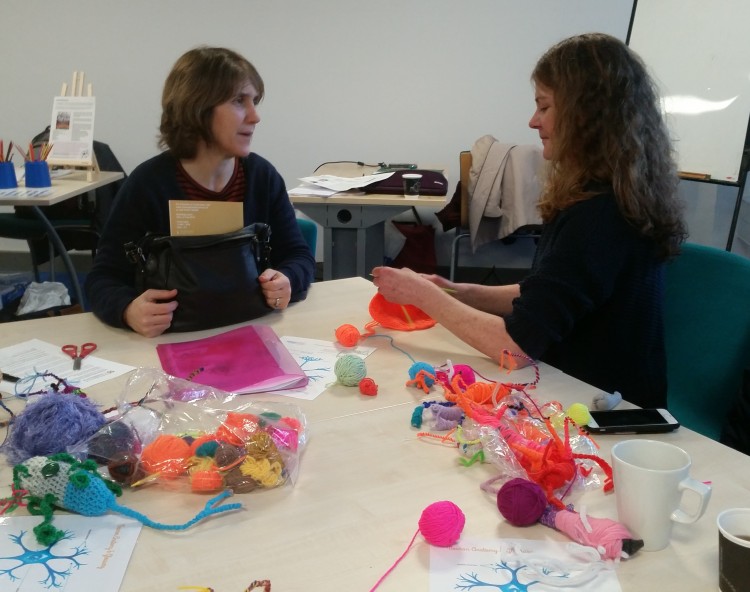 Guided by textile artist Pat Pillai, participants knit together woollen creations shaped to resemble neurons, as they listened to leading neurologists speak about the latest advances in the field. Those who did not know how to knit were free to cobble together mock neurons with colourful yarn wool and drain pipes. The individual “neurons” were then joined together from axon to dendrite to form a giant woolly “brain” which was put on display at various venues across the city.

There is a growing body of research that shows that craftwork such as knitting can help improve mental health, reduce anxiety and even prevent the onset of diseases like dementia.

An ambitious project that could change how we treat diseases

On March 14, genetic scientists Dr. David Bentley, Chief Scientist at Illumina, and Professor Mark Caulfield, Chief Scientist at Genomics England, gave a talk on the 100,000 Genomes Project and the massive impact it could have on public health and research into genetic diseases. The 100,000 Genome Project is an ambitious attempt to sequence the genome of 100,000 individuals to learn more about hereditary diseases. According to Professor Caulfield, the most impressive aspect of the project was that with the involvement of NHS Genomic Medicine Centres, it had become possible to collect samples from selected patients across England.

The Centre for Computing History, Cambridge, organised a robotics workshop for school children at their institute on Coldham’s Road, Cambridge. Nearly 15 to 20 children of all ages learnt to build circuits on a bread board and program microchips to run simple functions, in this case; to create a moving robot which could sense obstacles in their path.

The Centre for Computing History houses some of the earliest computers in existence (including parts of the world’s first commercial computer, LEO I), and regularly hosts workshops for schoolchildren, mostly in the 8-14 age group. “We organise a lot of programming and electronics workshops. On the old BBC Micros, we do a basic ‘Learn to program in BASIC’ session and for the slightly older children, we run a workshop called ‘Zeroes and Ones, where they create a game around a character they have designed,” said Anjali Das, Head of Learning, Centre for Computing History. It’s not just all work and no play – the centre regularly hosts Game Nights were the young and the ‘young at heart’ can have a go on 90s-style arcade games.

A place for discussion and debate

The best part of the Cambridge Science Festival was that the discussions did not remain confined to sound-proofed auditoriums. Various universities offered Open Days where residents could visit their campuses. Coffee shops and open bars stayed open later than usual and turned into makeshift venues for intense discussions on science. And if there was ever a shred of doubt whether people really cared about science, pretty much every talk had sold out two days in advance. That’s definitely a win for science!