Did you know the tamarind tree came from Ethiopia two thousand years ago? Or that the vast majority of Bengaluru’s avenue trees are native to South America? In fact, so many commonly-used plants have come from that continent, the famous botanist and Kannada writer B.G.L. Swamy wrote a book called Namme Hotteyalli South America (South America in our stomach).

If you’ve ever stopped 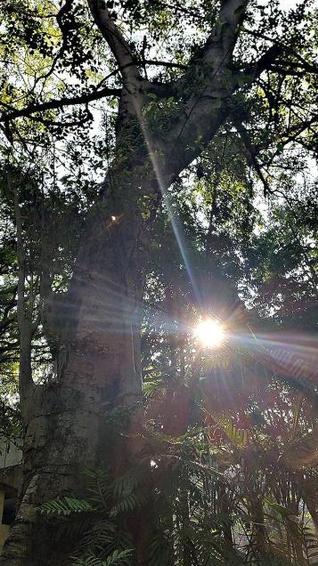 in the middle of the road to admire a gorgeous Pink Shower tree in bloom, a tree walk is right up your alley. The tree walk I dropped in for took place at Rest
House Park on Museum Road. We were led by our guide Arun, who, while not tree hugging or bird watching, runs a restaurant near Brigade Road. As for the tree walkers, they were an eclectic bunch, ranging from an editor of an e-magazine on sustainable living, an architect with a keen interest in permaculture farming, and a Ph.D. researcher from Los Angeles.

The walk nearly did not happen, because just as our guide began with a brief history on Bengaluru’s gardens, a security guard took umbrage to our “meeting”. After we convinced him of our harmless intentions, he reluctantly agreed. And then we set off.

“This here is the rain tree,” our guide began airily. The rain tree is a native of South America, its name possibly a shortened form of rainforest tree. It was once a popular avenue tree due to its leafy canopy, but of late municipal authorities have stopped planting it as its branches fall during heavy rains. It is a fast growing tree, says Arun, its soft timber a perfect choice for nesting barbets.

All the way from Madagascar

Next in line is the Gulmohar, a native of Madagascar; the mast tree (also called the False Ashoka!) with its tall, skinny frame and drooping leaves, and the Cassia Javanica or the Pink Shower Tree.

There are old favourites, the east India almond tree, the soap nut tree, the cannon ball tree. Fruit trees: mango, jackfruit, avocado and fig. Thin reed-like golden bamboo and stately silver oaks and mahogany trees. There are gorgeous flowering specimens like the flaming-red African tulip and the purple Jacaranda, waiting for spring to burst out in colour. It is astonishing that a space so concise can host more than 22 different species of trees.

Arun also identified a staggering variety of birds in the area, sometimes by just their call. Green enclaves are like magnets that draw the birds in, he stresses. The talk veers to current conservation methods, and how for various reasons, trees the city was known for are no longer being planted. Fast-growing trees are often adopted in sapling drives as they make for “good figures.”

We come to the end of our walk, each lingering in their own thoughts. There is a deep satisfaction in learning the names of trees and birds, it’s almost a feeling of groundedness. We talk about the altercation with the guard, about how ‘public’ our public spaces truly are. Someone fondly recalls the trees from their childhood, and reminisce how their beloved city is fast losing something that defined it for decades.

“It’s easy to learn about trees,” says our guide, before parting. “They aren’t going anywhere soon.”

(This piece first appeared in The Hindu Metroplus)