Sandhya (15) (name changed), a class 10 student from Madivala, dropped out of school in September last owing to health issues. She took up work at a nearby supermarket, earning Rs. 5,000 a month. Her mother, who works as housekeeping staff in a nearby hospital, is worried that she will not finish her education, but admits the extra money goes to meeting family expenses. When the roll call for class 10 came out, she did not have sufficient attendance to give the exam, and lost a year.

A friend of hers joined the supermarket after she failed her class 10 and did not want to give the examination again. But Sandhya stood a chance to not just pass, but pass well. “She’s a bright student,” say teachers at the government school where she studied. Why didn’t you apply when the dates were open, they ask her. 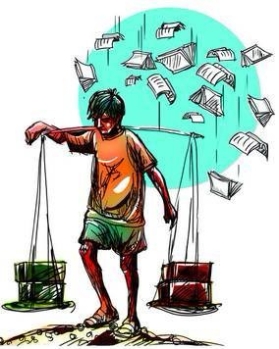 At the supermarket in question, I spotted a couple of girls working who looked younger than 16. When asked their age, one giggled and said, “I’m 18,” and pointing to another, “she’s 19”. She claimed she looked younger because of her short stature.

“Many small shops look for children in this age group to recruit, as they will be ready to work for lower pay, and they aren’t on the wrong side of the law,” said Rajakumari Michael of Child Rights and You. While the Child Labour (Prohibition and Regulation) Act, 1986 prohibits children working up to the age of 14, it is silent on the case of those on the threshold of adulthood, in the 14 to 18 age group. “In one instance, a petrol bunk recruited a boy of class 9 and asked him to get his classmates also to join for the same work.”
Girls seem the worst sufferers; once they drop out of school, they face pressure from their family to get married, or to get a job and look after their younger siblings.

Where to draw the line

“There is huge confusion on where to draw the line,” said Meena K. Jain, chairperson of the Child Welfare Committee (Bengaluru Urban), “There are children who go to school and go to work. There are others who drop out because they have no option but to earn for the family.”

“There is a lot of effort being put in to let children after class 10 to do both, study and earn on the side, with fixed guidelines in place to ensure their rights are not violated,” added Ms. Jain.

India has ratified the U.N. Convention of Child Rights, which states that “a child means every human being below the age of 18 years unless, under the law applicable to the child, majority is attained earlier.”

Neither the RTE Act nor the Child Labour Act supports the child beyond the age of 14. They tend to treat the child as adults. In doing so, the child is open to exploitation and abuse. They also do not acquire the skills that will bring them out of poverty. – Suma Ravi, Regional Director South, Child Rights and You

(Originally published in The Hindu.)